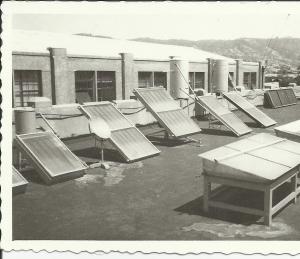 Solar energy played a very important role in the mining industry in XIX century at Atacama Desert. Nevertheless, the solar techniques used mainly for desalination of water were discarded in earlier XX century, and subsequently completely forgotten. In the 1950s their memory was recovered in USA, and solar technology has been used again in Atacama Desert at the industrial scale. At this time, a scientific and engineering world-wide network has been built.

The conception of evolution of technology has been discussed by George Basalla as a result of the confrontation of continuity and novelty through selection processes, affected by economic, social, and environmental dimensions, techniques, and policies. Gille and Hughes stated that the management of artefacts generates socio-technical systems; Unruh said that a technological momentum tends to lock-in the technical alternatives to generate competition through a lock-in of a techno-institutional complex. Finally, the 7th thesis of David Edgerton states that in the history of technology the preferred option is not always the most economical alternative. Moreover, it is not always the healthiest for human and non-human beings.

In this paper, we would attempt to understand some aspects of the social values and cultural factors involved in the early history of solar energy industry in the Atacama Desert. The work has been based on Chilean, USA, and European archives. The research encourages, in Basalla’s words, the development of a narrative on viable alternatives to winning technologies.

Dr. Antoni Roca-Rosell (born in Barcelona, Spain, 1951) currently lectures at the Universitat Politècnica de Catalunya – Barcelona Tech (UPC). In 1996, he co-founded the Centre for History of Technology of the UPC, which publishes the international journal Quaderns d’Història de l’Enginyeria since 1996. In 1991 he was one of the founders of the Catalan Society for the History of Science and Technology (SCHCT), being its president from 1993 to 2009. In 2010 he was elected corresponding member of the International Academy of History of Science. In 2014 he was elected member of the Institut d’Estudis Catalans. His field of research is the history of science and technology in Catalonia and Spain, including the history of engineering and technical education between the XVIII and XX centuries. One of his subjects is the transition from practical to scientific engineering. The background of his research is the comparative perspective and the analysis of the processes of diffusion and appropriation of scientific ideas and technical knowledge to better understand the social impact of science and technology in local and national contexts. He has published approximately 200 papers and 15 books.